On this day (Aug 29) 1833, the Mills and Factory Act was passed in England, establishing measures for improving the “Health and Morals” of child laborers. The Act was the first effective legislation empowering national inspectors with unlimited and unannounced entry into factories. Among the important changes made we…re: No one under the age of 9 years old could be employed. Children ages 9-12 could work no more than a 48-hour week. Teenagers could work 68-hour weeks. Provisions were also made for education and health, largely the result of testimony given by young workers before a Parliamentary committee investigating violations of earlier Acts.

Although the concept of child labor and regulations like these are offensive to people today, one must remember that in 1833, child labor was extensive. For years, orphans had been placed in workhouses rather than forced to live on the streets. Children from poor families were often sent to workhouses as well. Their plight was often featured in literary works by Charles Dickens. William Blake’s poem, “The Chimney Sweeper” (1789) told the story of a small child whose father sold him to a workhouse after the death of his mother, and who was then forced to train as a chimneysweep. Sadly, children aged 4-5 were often sold to clean chimneys due to their small size.

Consequently, the Mills and Factory Act was the beginning of strict regulations that brought about changes both socially-conscious authors would have not only welcomed, but supported.

“No one is useless in this world who lightens the burdens of another.” ~ Charles Dickens

On this day (Aug 26) 1875,  lawyer-politician-writer JOHN BUCHAN was born in Perth, Scotland. After a brief career in law, Buchan began writing fiction while also pursuing a political and diplomatic career.   Although he wrote many genres, Buchan is best known for his spy adventure novels, including the first “Richard Hannay” book entiitled, THE THIRTY-NINE STEPS, published in 1915.   He continued to write Hannay novels in his spare time, working full-time in the British Army ‘Intelligence Corps’.  In fact, Buchan is credited with starting the kind of espionage thrillers (which he called “shockers”) that would eventually lead to such characters as James Bond.

Although not as sexy as a James Bond novel, THE THIRTY-NINE STEPS featured “a galloping plot, a supervillain of malignant evil, flurries of deceptioin and deduction, and a pipe-smoking Richard Hannay doing his best for Club and Empire, though bottled as a pickled herring from the start and doomed with just twelve hours to go.”

John Buchan died in 1940 at 64, by this time the titled Lord Tweedsmuir of Elsfield and Governor-General of Canada. His son, William, was also an author, and his grandson, James Buchan, recently published his sixth book, the critically acclaimed novel entitled, “The Persian Bride”.

On this day (Aug 24) 1847, Charlotte Bronte (using the pseudonym of Currer Bell) sent her manuscript of JANE EYRE to her eventual publisher, Smith, Elder & Co., in London. The manuscript had been rejected five (5) times already. Although Bronte might have been discouraged, she was not ready to accept Wordsworth and poet laureate Robert Southey’s advice that, “novel writing wasn’t the proper pasttime of a lady”. The sixth time proved a charm. Smith, Elder & Co., published the novel and it was an immediate and somewhat controversial hit. 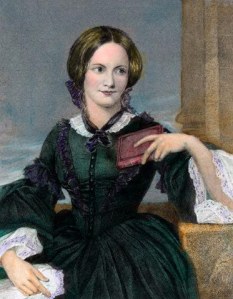